Rendering Plants and their Dark Side

(Don't read if you have a weak stomach) 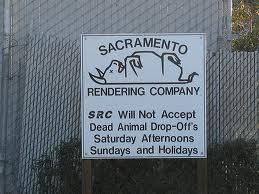 "The rendering plant floor is piled high with ’raw product’: thousands of dead dogs and cats; heads and hooves from cattle, sheep, pigs and horses; whole skunks; rats and raccoons --all waiting to be processed. In the 90-degree heat, the piles of dead animals seem to have a life of their own as millions of maggots swarm over the carcasses.

"Two bandanna-masked men begin operating Bobcat mini-dozers, loading the ‘raw’ into a 10-foot-deep stainless-steel pit. They are undocumented workers from Mexico, doing a dirty job. A giant auger-grinder at the bottom of the pit begins to turn. Popping bones and squeezing flesh are sounds from a nightmare you will never forget.

"Rendering is the process of cooking raw animal material to remove the moisture and fat. The rendering plant works like a giant kitchen. The cooker, or ‘chef,’ blends the raw product in order to maintain a certain ratio between the carcasses of pets, livestock, poultry waste and supermarket rejects.

"Once the mass is cut into small pieces, it is transported to another auger for fine shredding. It is then cooked at 280 degrees for one hour. The continuous batch cooking process goes on non-stop 24 hours a day, seven days a week as meat is melted away from bones in the hot 'soup.’ During this cooking process, the soup produces a fat of yellow grease or tallow that rises to the top and is skimmed off. The cooked meat and bone are sent to a hammermill press, which squeezes out the remaining moisture and pulverizes the product into a gritty powder. Shaker screens sift out excess hair and large bone chips. Once the batch is finished, all that is left is yellow grease, meal and bone meal.

"As the American Journal of Veterinary Research explains, this recycled meat and bone meal is used as ‘a source of protein and other nutrients in the diets of poultry and swine and in pet foods, with lesser amounts used in the feed of cattle and sheep. Animal fat is also used in animal feeds as an energy source.’ Every day, hundreds of rendering plants across the United States truck millions of tons of this ‘food enhancer’ to poultry ranches, cattle feed-lots, dairy and hog farms, fish-feed plants and pet-food manufacturers where it is mixed with other ingredients to feed the billions of animals that meat-eating humans, in turn, will eat.

"Rendering plants perform one of the most valuable functions on Earth: they recycle used animals. Without rendering, our cities would run the risk of becoming filled with diseased and rotting carcasses. Fatal viruses and bacteria would spread uncontrolled through the population.

"Death is the number one commodity in a business where the demand for feed ingredients far exceeds the supply of raw product. But this elaborate system of food production through waste management has evolved into a recycling nightmare. Rendering plants are unavoidably processing toxic waste.

"The dead animals (the ‘raw’) are accompanied by a whole menu of unwanted ingredients. Pesticides enter the rendering process via poisoned livestock, and fish oil laced with bootleg DDT and other organophosphates that have accumulated in the bodies of West Coast mackerel and tuna.

"Because animals are frequently shoved into the pit with flea collars still attached organophosphate-containing insecticides get into the mix as well. The insecticide Dursban arrives in the form of cattle insecticide patches. Pharmaceuticals leak from antibiotics in livestock, and euthanasia drugs given to pets are also included. Heavy metals accumulate from a variety of sources: pet ID tags, surgical pins and needles.

"Even plastic winds up going into the pit. Unsold supermarket meats, chicken and fish arrive in styrofoam trays and shrink wrap. No one has time for the tedious chore of unwrapping thousands of rejected meat-packs. More plastic is added to the pits with the arrival of cattle ID tags, plastic insecticide patches and the green plastic bags containing pets from veterinarians.

"Skyrocketing labor costs are one of the economic factors forcing the corporate flesh-peddlers to cheat. It is far too costly for plant personnel to cut off flea collars or unwrap spoiled T-bone steaks. Every week, millions of packages of plastic-wrapped meat go through the rendering process and become one of the unwanted ingredients in animal feed.

"The most environmentally conscious state in the nation is California, where spot checks and testing of animal-feed ingredients happen at the wobbly rate of once every two-and-a-half months. The supervising state agency is the Department of Agriculture's Feed and Fertilizer Division of Compliance. Its main objective is to test for truth in labeling: does the percentage of protein, phosphorous and calcium match the rendering plant's claims; do the percentages meet state requirements? However, testing for pesticides and other toxins in animal feeds is incomplete.

"In California, eight field inspectors regulate a rendering industry that feeds the animals that the state's 30 million people eat. When it comes to rendering plants, however, state and federal agencies have maintained a hands-off policy, allowing the industry to become largely self-regulating. An article in the February 1990 issue of Render, the industry's national magazine, suggests that the self-regulation of certain contamination problems is not working.

"One policing program that is already off to a shaky start is the Salmonella Education/Reduction Program, formed under the auspices of the National Renderers Association. The magazine states that ‘...unless US and Canadian renderers get their heads out of the ground and demonstrate that they are serious about reducing the incidence of salmonella contamination in their animal protein meals, they are going to be faced with...new and overly stringent government regulations.’

"So far, the voluntary self-testing program is not working. According to the magazine, ‘...only about 20 per cent of the total number of companies producing or blending animal protein meal have signed up for the program...’ Far fewer have done the actual testing.

"The American Journal of Veterinary Research conducted an investigation into the persistence of sodium pentobarbital in the carcasses of euthanized animals at a typical rendering plant in 1985 and found ‘... virtually no degradation of the drug occurred during this conventional rendering process...’ and that ‘...the potential of other chemical contaminants (e.g., heavy metals, pesticides and environmental toxicants, which may cause massive herd mortalities) to degrade during conventional rendering needs further evaluation.’

"Renderers are the silent partners in our food chain. But worried insiders are beginning to talk, and one word that continues to come up in conversation is ‘pesticides.’ The possibility of petrochemically poisoning our food has become a reality. Government agencies and the industry itself are allowing toxins to be inadvertently recycled from the streets and supermarket shelves into the food chain. As we break into a new decade of increasingly complex pollution problems, we must rethink our place in the environment. No longer hunters, we are becoming the victims of our technologically altered food chain.

"The possibility of petrochemically poisoning our food has become a reality."

That article is one of the most disgusting things we have ever read.

"In the U.S., plants process billions of pounds of protein from dead cows, sheep, pigs, chickens and other animals into animal feed each year.

Farmer Carter doesn’t mention this, but reporters Satchell and Hedges do: "Chicken manure often contains campylobacter and salmonella bacteria, which can cause disease in humans, as well as intestinal parasites, veterinary drug residues, and toxic heavy metals such as arsenic, lead, cadmium, and mercury. These bacteria and toxins are passed on to the cattle and can be cycled to humans who eat beef contaminated by feces during slaughter."

If they’re not being fed on rendered by-products or chicken manure, according to the Satchell and Hedges article, "Animal-feed manufacturers and farmers also have begun using or trying out dehydrated food garbage, fats emptied from restaurant fryers and grease traps, cement-kiln dust, even newsprint and cardboard that are derived from plant cellulose. Researchers in addition have experimented with cattle and hog manure, and human sewage sludge. New feed additives are being introduced so fast, says Daniel McChesney, head of animal-feed safety for the U.S. Food and Drug Administration, that the government cannot keep pace with new regulations to cover them."

Cattle and hog manure and human sewage sludge as possible foods for the animals eaten by human beings.

We are very happy to report that Life’s Abundance contains NONE of the things you have read about above, holistically formulated, whole ingredients!!!