Rescue Remedy First Aid Kit for Pets in a Bottle

Rescue Remedy (RR) is a Bach Flower remedy. The Bach Flower Remedies are “essences” or “energies” of various plants, each plant carrying its own therapeutic healing vibration. Because of this, flower remedies are extremely safe, and there is no way in which the user can overdose on them.

Rescue Remedy is the most popular Bach Flower Remedy in North America (and probably in many other parts of the world). It’s not a single remedy, but a combination of five:


I’ve used Rescue remedy for driving-related traumas, physical injuries (especially cuts), fear-related insomnia, stressful situations, and other purposes. It has been especially helpful to me preceding a visit to the dentist, before appearing for jury duty, and when we were moving Beyond the Rainbow to its website. (We just kept the bottle by the computer).

People I know have taken it before and after surgery, during labor and after childbirth, and for a wide range of traumas.

I insert here the usual disclaimer that Rescue Remedy is no substitute for medical treatment; however, in my experience and that of others it has helped to alleviate the mental and emotional stresses which can worsen a medical emergency. 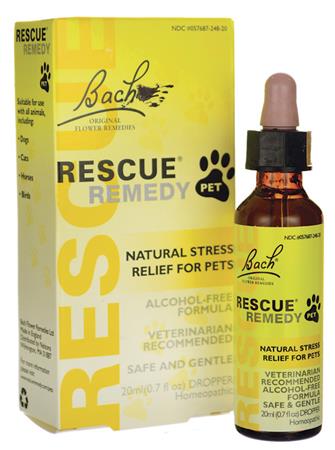 Rescue Remedy can be used in many different ways: after a seizure to reduce pacing and other post-ictal behaviors; to reduce stress in various situations, including visits to the vet, thunderstorms, fireworks, having company in the home, etc. Anything that causes your dog to experience stress (both “good” and “bad” stress) can potentially lead to seizure activity and by lessening the effects of the stressor on the dog’s system, seizures may be prevented or the severity and/or number lessened.

Many of us use Rescue Remedy with our epi-dogs and non-epis as well. Some dogs do not respond to Rescue Remedy, post-ictally (after a seizure), however. In addition to using the RR after seizures, many people use the remedy in stressful situations and find that it has helped to calm their dogs in situations of panic and hyperactivity, such as prior to a vet visit, or when there is a lot of household commotion or change of routine. Some people believe that it may also calm their dogs enough to avoid a seizure if used when pre-ictal (before a seizure) behavior is present.

You need only give a couple of drops of Flower Remedies with each dose. Actually, it is not the amount given, but the *frequency* in which the remedy is given, that determines its effectiveness. In particularly stressful situations, giving 2-3 drops of RR every 15 to 30 minutes until the stressful situation has passed is most effective. Some people add a few drops to their pet’s water bowl or food. Also, if RR needs to be given during a seizure, it is not recommended that the remedy be administered orally. Many people squirt a drop or two on the dog’s forehead or bedding during the actual seizure.

How to Actually Take Rescue Remedy

It’s generally recommended that if you feel that you need a mixture with two or more of the remedies in Rescue Remedy that it makes more sense to use Rescue Remedy itself in your mixture. It counts as one remedy; however, you add four drops to your mixture instead of the usual two.

In an immediate crisis you can take it directly from the bottle, four drops at a time, as frequently as every twenty minutes, or put the four drops in a glass of water and sip it often.

Do be careful about taking it on an empty stomach, as Rescue Remedy, like all Bach Flower Remedies, is preserved in brandy.

Giving Rescue Remedy To Others


Rescue Remedy can be given to people who are unconscious. Because lawsuits are popular activities I don’t suggest that you give Rescue Remedy to a stranger. However, if an friend of yours needs it you can put it on pulse points, such as the temples and wrists.

I’ve given it several times to birds who flew into a glass window or door. Put a few drops on or into the beak. This often creates an immediate recovery.

In general, Rescue Remedy can be very helpful for animals in cases of physical or emotional trauma. For animals up to human size put four drops in the drinking water. For larger animals increase the dosage to ten drops. Cats, in particular, don’t like the smell or taste of alcohol. Rub the Rescue Remedy behind their ears; they’ll hate it, but it’s good for them.

It’s also good for plants when you repot them, or if they are looking unhappy.

Above all, don’t be limited by my suggestions. The uses of Rescue Remedy are virtually limitless.

The following information is taken from Bach Flower Remedies for Animals written by Helen Graham and Gregory Vlamis. In the section on dosages, it says: “Flower essences (FEs) are administered in drops, a single drop at a time. They are normally given by mouth. Five days is the average period of treatment, although they can be continued for two weeks or longer. Dosage varies with the particular situation and the animal species being treated. The standard dose is 4 drops. More drops are not harmful, but wasteful. Fewer drops can be used if the animal is quite small (squirrels, hamsters, rabbits). For large breeds of dogs (St. Bernards, Great Danes), sheep and goats, 6 drops should be given. Horses and cows get 10-15 drops. These can be given as often as necessary but at least four times daily. Drops can be applied directly on or under the animal’s tongue, dropped onto the nose to be licked off, or rubbed into the gums or lips. They also can be added to water, food, treats, etc., but this is not as reliable because you can’t monitor the exact amount they are taking. You can also mix with water and spray it on the skin or in the air surrounding the animal. You can add it to lotions and apply it topically to the skin or fur, pulse points, or other soft cavities of the body (under the leg or arm) – I put it inside their ears sometimes. You can also bathe the dog with water containing a few drops of FEs. They respond with great immediacy to the correct essences. If there is no apparent change after five days, you are using the wrong remedy. FEs are safe to take in combination with each other and with any other medications – allopathic or homeopathic. They are harmless, and overdose is impossible. If you administer the wrong essence, it will simply have no effect.”

Rescue Remedy for Pets can be purchased online at Amazon here.